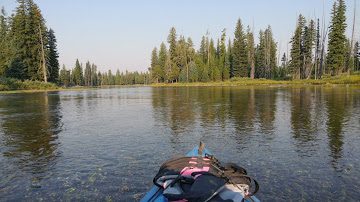 We arrived in Island Park a couple days before the eclipse to meet our friends, Katherine & Gautam, who are from Atlanta and also traveling across the U.S. with their Scamp!  We heard from the locals that there are tons of moose in the area, and I’m dying to see a moose already after failed attempts in the BWCA and Yellowstone.  The river in Big Springs is apparently a hot spot, so the 4 of us took our kayaks down to the river, leaving around 7am to get the best chance of a moose sighting.  The put-in was the Big Springs boat ramp and take out is 4 miles down the river at Macks Inn.  As we drove the road to the boat ramp, I kept my eyes peeled for moose in the woods and streams along the road.  About halfway down the road, I spotted my first one, munching happily on a bush in the distance!  I’m not even going to try to explain how excited I was.  We pulled over and watched the cow (female) moose graze, eating leaves off trees and bushes about 150 yards away.  We took this as a good sign of the day to come!

The river started off very shallow, at times we even had to get out and walk the kayaks.  We took it slow, hoping to see moose around every turn.

About a mile in, we saw a fisherman and asked if he had seen any moose.  When he replied that there were 3 bulls and a cow ahead on the river, we started hauling ass to see them!  Two or three more turns down the river, and we spotted a large brown female moose grazing on the river!  She was alone on the bank, and Reet and I stopped to watch her for a while, and of course take some pictures.  She didn’t seem too bothered by us because we kept our distance (which means we also didnt get the greatest pictures), but eventually she climbed into the brush just before Katherine and Gautam caught up.

We kept going down the river and around the next bend we caught sight of a momma and baby moose crossing the river.  The baby was pretty young, following his mom along and feeding along the way.  He got a bit startled by us, and ran across the river but the mom didn’t mind us since we had stopped quite a ways back.  We watched them graze their way across the river and to the other side for quite a while, until they were halfway submerged in the bushes.

Four moose in one day – Island Park is amazing!  We didn’t end up seeing the bull moose that the fisherman told us about but enjoyed the rest of the beautiful paddle down to Macs Inn.  Cabins started to dot the river as we got closer, and we envied the owners’ amazing views and wildlife encounters!

The 4 of us inhaled a Mexican lunch at the Café Sabor across the river from Macs Inn after the paddle, and then Reet and I set out to find the multi-use/bike path (converted train tracks) we read about that crosses the area.  The trail turned out to be more frequented by ATVs and was sandy/gravelly and bumpy most of the way.  Even though it wasn’t the best for biking, it had scenic views of the valley and surrounding mountains and we knocked out 11 miles before turning around and taking the gravel road alongside the trail back most of the way (much easier)!

We finished off the day with some fried appetizers and beers at a local restaurant before heading back to our site.  No sooner had we left the restaurant than Reet slammed on the brakes and insisted that I needed to look down the side road we just passed.  I jumped out to see, and there was another mom and baby moose munching away on trees just feet away!

We stopped on the other side of the road and watched them for a while, and gathered quite a crowd of onlookers once the passersby realized what we were watching.  Most just stopped for a picture though, and soon we were alone watching them again until they eventually ambled into the bushes.  So scratch that, 6 moose in one day!  I love Island Park!