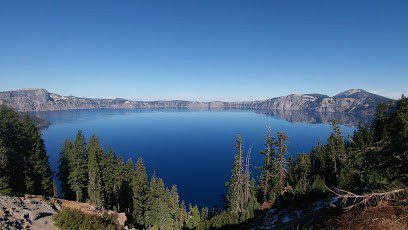 We visited another National Park today – exciting because it has been a while!  From where we were camping at Waldo Lake last night, we drove south about an hour and a half to visit Crater Lake National Park.  The lake was formed 12k years ago after a volcano a thousand times the size of Mount St. Helens erupted and a caldera formed, filling in with rain and snow.  There are no streams or inlets/outlets, so the water is some of the purest in the world.  It’s also the deepest lake in the U.S., and is a gorgeous deep blue color due to the lack of plant life in the lake.  It’s surrounded by small mountains, and lots of great hiking.

We planned to drive the Western rim of the lake up to highway 138 to continue our journey West.  But when we arrived, we found out the Western Rim was closed for construction, so we drove the East rim loop instead, which was a bit longer but had tons of gorgeous views and overlooks.  I think we may have actually been better off taking this side!  It was already later in the day, so we skipped the hikes and did the National Park the old-fashioned way… driving!  ?  We still were able to see many amazing views of the lake, the surrounding mountains and the islands without leaving the comfort of the RV (well we got out to take some pictures at overlooks).

Once we hit 138, we started looking for a place to stay that would be near the IMBA epic North Umqua trail, another amazing sounding trail that follows 138 for 75 miles – stretching from just north of the park almost to the city of Roseburg.  The highway turned out to be an Oregon scenic drive, and we enjoyed incredible views of the Umpqua River and the surrounding old growth forests the whole way.  We can definitely see why it’s been named a scenic drive – we highly recommend it!

We started to smell smoke as we drove and we realized that we were entering a very recent burn area, and some trees were still smoldering.  We had heard about the Oregon fires and realized we were not far behind a large one.  Patches of completely burned forest, blackened trees and piled up black logs soon appeared.  This highway was probably closed for quite some time very recently, until they could fight the fire and clean up all the downed trees.

When we arrived, the helpful campground host explained that the fires came within feet of the campground and they had to evacuate for 3 weeks.  The firefighters actually used the campground as a base in fighting it.  Luckily the fire didn’t impact the campground and continued on a different way.  He also said parts of the Umpqua trail are still closed because of the falling trees, so we would have to drive east a bit tomorrow to find a section that’s open.  Read our next blog post on the Umpqua trail to find out if we were able to ride it!