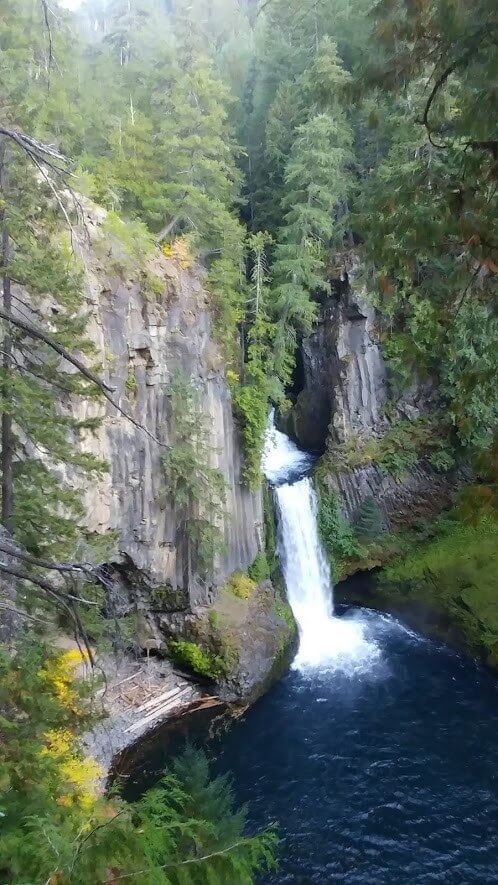 Our plan after Crater Lake National Park was to ride the North Umpqua IMBA epic trail.  It’s a 75-mile long bike/hike trail stretching from just north of Crater Lake NP along the Umpqua River, and finishing just before the city of Roseburg.  We found a great little campground called Umpqua’s Last Resort right on the trail and river.  We have been boondocking/dispersed camping mostly lately, but it’s nice to plug in every once in a while (I get excited to use our Vitamix)!  This campground was on our Passport America membership, so we paid half – only $16.50!

As we drove along Hwy 138 from Crater Lake NP toward the campground, we enjoyed incredible views of the Umpqua River and the surrounding old growth forests.  It’s a gorgeous highway- we highly recommend taking it, and can totally see why it’s an Oregon scenic roadway.

We started to smell smoke as we drove and we realized that we were entering a very recent burn area, and some of the trees were still smoldering.  We had heard about the Oregon fires but didn’t realize we were driving right through where they were.  Patches of completely burned forest, blackened trees and piled up black logs appeared on the side of the road.  This highway was probably closed for quite some time very recently, until they could fight the fire and clean up all the downed trees.

When we arrived at the campground, the host explained that they were evacuated for about 3 weeks recently, and the fire fighters were using the campground as base camp for fighting the fire.  It’s still burning a few miles up, but went the other direction from the campground so they weren’t impacted thankfully.  The fire concern was over, and we were even able to build a fire at our site – something we hadn’t done in quite a while because of the restrictions!

Unfortunately, the fire impacted the trail and all the sections near the campground were closed.  So, we drove about 15 minutes east to the Lake Totokee trailhead, to ride a more easterly section of the trail that we hoped was open – and also has an amazing waterfall we wanted to check out.

We got lucky – the trail heading West was closed but it was open eastwards.  Yay!!!  We started off riding along an absolutely stunning ridgeline along the river, surrounded by old growth forest and green moss-covered boulders and logs.  This section wasn’t too technical or steep, but had beautiful views.  We climbed for a bit, then leveled out along a grassy area along the river, and then got to a new section after a bridge that again had a trail closed sign.  While we were debating what to do, a truck pulled up hauling a small tractor, and we asked the driver about the trail closed sign.  He said he just finished fixing the bridge down the trail a bit, and the sign would be taken down soon.  The fire hadn’t come anywhere near this part of the trail, so he said we would be fine to go.  He didn’t have to tell us twice, we were on our bikes before he even finished!  We crossed over a couple bridges, through more beautiful forests and by the hot springs (just off the trail!) until we reached the Dread & Terror section.  Each 10-15 mile section has a name and a trailhead to make it easier to enjoy sections of the trail (each has it’s own difficulty rating).  Dread & Terror sounded pretty awful to me, but we our handy little trail pamphlet told us that it was named by early settlers, after a four-mile ridgeline south of the river and the disagreeable possibility of fighting forest fires in the impenetrable thickets of white thorn brush blanketing the area.  While it’s definitely not as bad as the name makes it seem, this section is more technical and has more elevation.

This section was somehow even more beautiful, passing by 2 waterfalls in the first mile of the section.  We turned around soon after the falls to head back, getting about 12 miles in but we wanted to see the Toketee Falls and then head West towards the Oregon coast!  This set of Umpqua river waterfalls (there are many along the river) are stunning!  It has 2 sets of cascades- first over some large rocks, and then through an opening in the basalt formatting framing the river, dropping over 100 feet.  It’s one of the most famous waterfalls in Oregon, and we can see why!