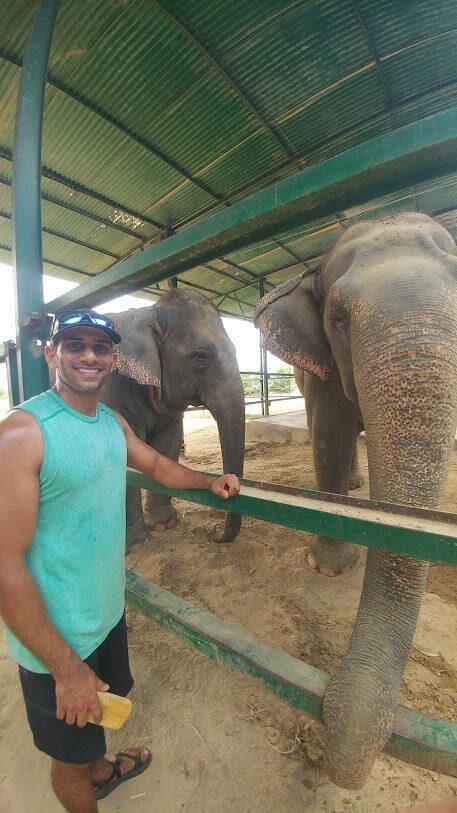 This incredible organization has its roots in bear rescue, and singlehandedly eradicated the horrendous practice in India involving thousands of bears stolen from the wild and forced to dance for their kidnappers’ profit.  Once every imprisoned bear was in the safety of Wildlife SOS rescue facilities, and able to live as close to a normal bear life as possible, Wildlife SOS moved on to elephants.  There are over 3000 captive elephants in India, many living in abusive situations where they are forced to beg for money in temples or are neglected and starved former circus elephants, a source of pride for owners even if they can’t afford to feed them.  The Rescue and Rehabilitation Center in Agra currently houses 20 elephants (12 female, 8 male) that have been rescued from similar appalling circumstances, and this extraordinary rescue group gives volunteers the opportunity to assist with their recuperation through feeding, baths and walking with these gentle giants.

We joined a group of volunteers from Canada to assist the experienced mahouts in slowly working to mend the elephants’ physical and physiological injuries of years of mistreatment.  Many times, the elephants’ original mahouts are recruited to stay with the elephant, and come work for Wildlife SOS to learn rescue and rehabilitation, which most of these elephant-loving mahouts are eager to accept.

Feeding the ladies (we couldn’t visit the males since they were in mustf) involved cutting up massive amounts of local fruits, from watermelons to papayas, while evading Lakshimi’s sneaky attempts to steal the fruit as soon as our backs were turned.  Lakshimi is a pudgy elephant who loves her food, but came in severely overweight from far too many inappropriate snacks in her former life as a begging elephant.  Today she enjoys a nutritional diet at the rescue center which has brought her down to a healthier weight, but she is always on the lookout for ways to get creative with her long trunk to secure additional snacks.

The fruit gets weighed out for each elephant twice a day, and is added to their diet of porridge and greens to ensure a nutritious and well-balanced diet.  Hand feeding the eager elephants was our favorite – we propelled handful after handful of fruit into their awaiting trunks as fast as we could scoop it from the bucket.

The porridge balls went directly into their open mouths – a bit intimidating the first time you shove food straight into the mouth of a 12,000-lb animal!  We were surprised at the gentleness of these remarkable beings.  For the elephants suffering from injuries (primarily on their feet from many years on concrete surfaces), healing medicines are hidden in the porridge balls, unbeknownst to them!

It was humbling to meet Rhea and Mia after following their rescue story on Facebook 18 months ago, although we mourned the loss of their third comrade Sita who recently passed away from her injuries.  The Nut Herd were also like celebrities to us, after reading all about their rescue and subsequent “adoptions” of the younger Peanut and Coco by the older female elephants, Asha and Lashi.  We watched poor Coco sway back and forth for quite some time at the edge of their enclosure, a lingering effect of abuse and captivity which the mahouts explained has actually improved significantly since she arrived.

Our final (and favorite!) assignment was to assist with the evening elephant walk to the adjoining field, encouraging the elephants along the way with a favorite treat: bananas.  We learned that elephants, like people, take to certain other elephants and form strong bonds, and at times can dislike another elephant.  So, they are taken out in groups based on who gets along with whom.

During our incredible day of volunteering, we also learned about Wildlife SOS’s programs to help rescue leopards, snakes, monkeys and other wildlife from accidents like leopards falling into water wells, human/wildlife clashes, and abusive scenarios like snake charming.  A successful Wildlife SOS program has turned snake charmers into snake rescuers, utilizing their extensive knowledge of snake behavior for the benefit of the species, rather than exploitation.

An operation like this requires a ton of funding, as a single elephant can eat 600 pounds of food a day!  Legal work is also expensive, and Wildlife SOS is constantly working through legal battles to be given approval to take elephants that are being mistreated, illegal under Indian law.  You can follow Wildlife SOS’s amazing work, find out more about volunteering, and donate to help this phenomenal organization continue to rescue India’s oppressed and exploited elephants here: