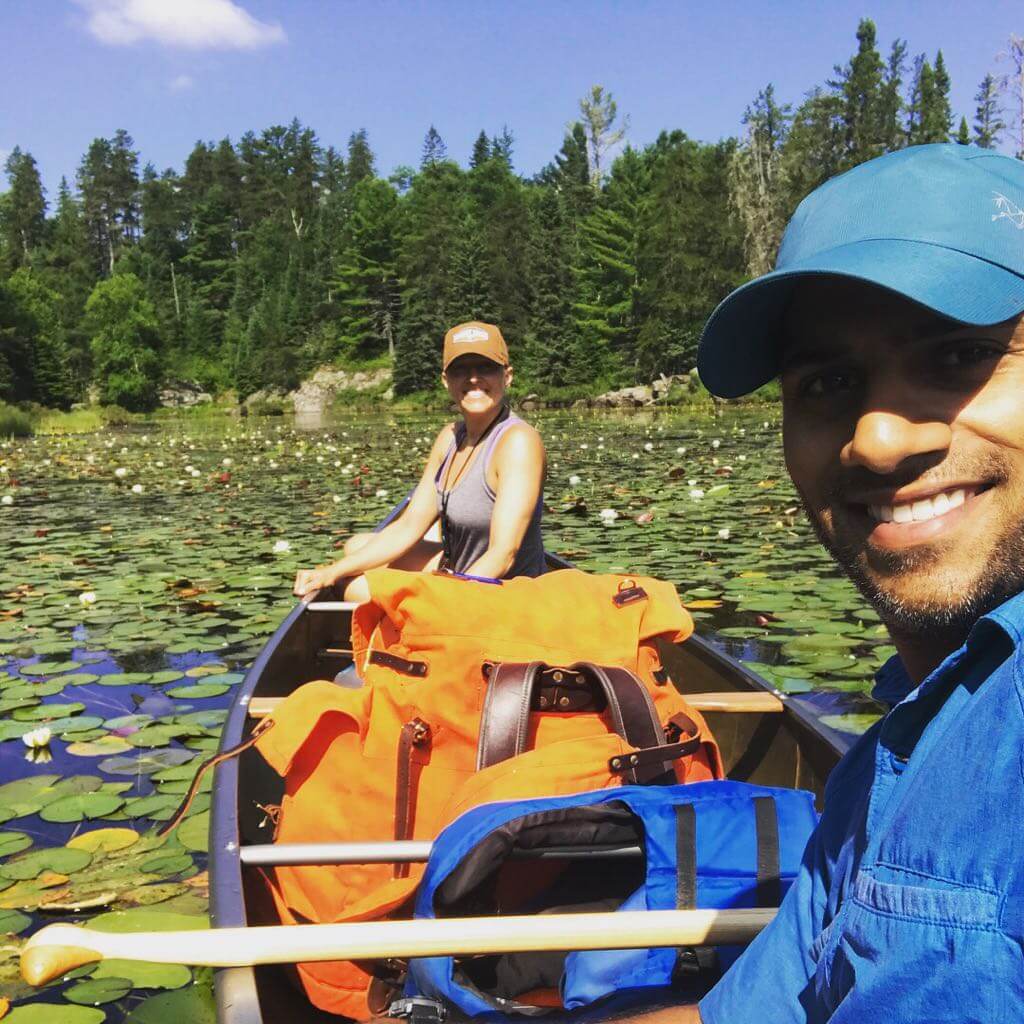 This year we decided to paddle the Frost River loop- one of most remote and least visited areas of BWCA, but with high chances of seeing wildlife and specifically, moose.  It was my pick of course! ?  The trip was characterized by epic falls, lots of mud and leeches, walls of mosquitos, and long days of strenuous outdoor workouts paddling and portaging… and we loved every bit of it!  Ok, maybe not the mosquitos… but we adore the astounding beauty of this remote wilderness which keeps us coming back for more every year!

This year we rented canoes and a bear canister (first time for this) from Sawtooth Outfitters, a great little shop in Tofte, right on the way up to Grand Marais and the Gunflint Trail.  The Frost River route started 47 miles up the Gunflint Trail near Tuscarora.  It was a beautiful drive, and despite keeping my eyes peeled, none of the famous Gunflint Trail moose made an appearance.  Too late in the day I guess!

We unstrapped the canoes from the Prius, put on our packs, and with much less fanfare than previous years, we dropped quietly in at Cross River EP#50, already missing our usual BWCA companions, Lindsay and Jeff!

From Cross River we entered the first lake of many, Ham Lake.  On our very first of 28 portages, Reet slipped and fell on a slippery rock right on his butt (Epic Fall #1), and the bear canister came crashing into his head.  Poor thing… as soon as I knew he was ok, I broke out into relentlessly giggling.  This was far from the last fall of the trip….

There were some good campsites near some marshy areas in the first few lakes (we really wanted to see moose), but unfortunately, they were taken so we kept going.  We portaged into Rib Lake, No Name Lake, Carl Lake, then Long Island Lake where we finally settled down for the night.  It was a marshy area, but no moose to be seen yet.  We did see a bald eagle today while paddling though!  We saw maybe 3 other paddlers today, which shows how remote it is – it’s the first day and very near a few different entry points so typically we would see multiple other groups.  Our site was great – it was on a little peninsula jutting out into the lake and faced West which allowed us to enjoy the beautiful sunset over the lake.  We ate our gourmet rehydrated food dinner on the rock overlooking the lake, but were forced to retire to our tent soon after because the mosquitos created a legitimate buzzing wall around us.  July in the Boundary Waters… I have to admit we had been warned!  We did get to fall asleep to the peaceful calls of the loons echoing off the lake though, which more than made up for it!  And our cozy tent didn’t let any invaders in.

Wednesday morning we slept in a bit (oops 11am!), but we knew we only had a short paddle and a few small portages to get to Frost Lake since we covered so much ground yesterday!  We encountered lots of mud today, there’s been a lot of rain lately and many of the portages were knee deep in mud!  Luckily, Reet did a great job of steering us right up to the portage so I could save my feet from the mud.  ? He, on the other hand, got buried in it… even falling knee deep in the mud in one portage (Epic Fall #2), with the canoe on his head and all!  Thankfully he has good balance and strength, and was able to dig his leg out and save his shoe, all while keeping control of the canoe!

While crossing one of the larger lakes, we heard 2 loons calling and paddled closer to have a look at what the commotion was about.  Soon enough, 2 tiny babies joined the adults and the little family swam off to do whatever loons do.  So cool!

When we got to Frost Lake, we camped at the site closest to the river so we could be nearby for the early morning moose scouting.  We had the lake to ourselves again, we’ve seen so few people on this route!  The weather was cloudy but still warm, and it rained just a bit as Reet set up the hammock, his favorite camping activity.  As I went over to observe, he sat down leisurely and boom fell flat on the rock below (Epic Fall #3), taking half of the now-ripped hammock with him.  I won’t advertise the brand here, but we won’t be buying that one again!  Fortunately, we had brought 2 hammocks and the other one went up without a hitch, and Reet could still enjoy his favorite camping activity.

Later that evening, we went for a paddle around dusk to check out the swampy area nearby (no moose) and perform some water quality tests.  I donate to Save the Boundary Waters campaign, and got the opportunity this year to help them out with water testing in the BWCA!   They sent volunteers a water testing kit, and asked them to test lakes in the BWCA area for ph, turbidity, and several other data points.  Our tests showed the quality was good, and we recorded our observations about the water and environment in the provided notebook which we will send back at the end of the trip.  The mosquitos again forced us to bed around dusk… a common theme on this trip!

Thursday we woke up early at 6am hoping to start the day at sunrise and increase our potential of seeing moose.  Unfortunately, 6am wasn’t early enough because the sun was already up when we rose!  We hurried to eat and pack up camp, and after a long portage into the river, we got lucky with the high water which allowed us to skip a couple portages along the river.  It was a beautiful sunny day and the river was calm, quiet and swampy, and we spent the day paddling through the river and the small lakes along the river.  We saw telltale signs of moose all along the way, with large tracks in the swamps, moose poop and fresh moose tracks in the mud on a portage right in the middle of a swamp (the 65 rod portage from pencil lake).  At that point we actually decided it would be way more fun to see a moose while paddling than portaging!  But they evaded us and we never actually saw any despite lots of evidence.

We had a lot of hilly, rocky portages today and I slipped on a rock on one (Epic Fall #4) and fell into the mossy hillside with my pack and bear canister (no injuries). It can be difficult to right oneself after a fall with a heavy pack!

We also encountered tons of beaver dams in the river, forcing us to get out several times and play the “see-saw” game with the canoe over the dam, jumping back just in time to set sail down the river again.  We enjoyed seeing frogs and toads of every size at the landings, but the spiders in the beaver dams were not my favorite.  Another less welcome guest was discovered after a particularly muddy portage when Reet pulled off his Chacos and discovered several leeches clinging to his feet.  I had one leech too, and had a mini-freak out and had to look away as Reet pulled it off.  I was much more fortunate than Reet though, who discovered after pulling off a couple large leeches that the other brown specs on his feet were not pieces of mud, but teeny, baby leeches!  We had to take a video for the sisters, who will love to see this!  We had stopped at a campsite on Afton Lake for lunch where an enterprising little chipmunk boldly tried to scurry up and eat our peanut butter sandwiches as we were distracted by pulling off leeches!

After another water sample test on Afton, we paddled all the way to Mora Lake, tired and ready to set up camp.  The site on that lake wasn’t all that nice, so we decided to keep going to Crooked Lake despite our exhaustion.  We paddled through some burnt areas from a large fire, and down a narrow channel and through a beautiful rocky portage to Crooked Lake.  We were so glad we kept going, we found the most incredible site on an island in the middle of Crooked Lake!  It’s atop a large rock overlooking the water on 3 sides, with trails leading to the woods and even a hot tub!  This was my little joke, I was dying for a hot tub after the long day of paddling and portaging (15 miles!) and the site just happened to have a little enclosed pool of warm-ish water that I used as my personal spa (with wine).  It was awesome!

The weather was warm and we swam and dried off on the rocks before making an amazing vegan mac & cheese dinner and eating it on top of the rock overlooking the lake.  Still no people, we have the lake to ourselves (again!)

Friday we packed up and shoved off from the “best site in the BWCA” to head to Tuscarora lake, portaging through Owl Lake on the way.  It was an easy paddling day and we arrived early, getting a prime island site on Tuscarora Lake as well.  The lake was empty when we arrived, but a few groups arrived later- our first sign of people in 3 days!  Tuscarora is only a couple portages from the exit point, so we expected to finally see people there.  The site was beautiful and we swam, enjoyed some hammock time, did some water testing, and went for an evening paddle hoping for one last chance to see moose.

I decided to try out the hammock today, and apparently didn’t have the loading process quite down, ending up on my ass on the rock after it flipped completely over on me (Epic Fall #5)!!  Bruises aside, these falls were starting to get pretty funny.  We made a fancy rehydrated dinner and dessert, which we relished in our tent to avoid the onslaught of mosquitos.  We bundled up in rain jackets, head nets and tons of Off to go wash the dishes in the woods.  The site was heavily wooded in the back and the farther we went from the water, the thicker the mosquitos got!

Saturday – our last day in the BWCA!  We geared up for our longest portage yet – a 420 rod portage out of Tuscarora Lake.  Just as we were going to set off, a beautiful bald eagle flew over our island and settled in the tallest tree just above our camp.  We stopped to watch it for a while, and considered it a good omen for the end of an amazing trip!

The portage was long, muddy, steep, buggy and a great workout.  We added some music to make it a bit more enjoyable.  A couple more small lakes and portages later, we reached our last lake – Round Lake- where we pulled the canoe out of the water for the last time sadly, and bid goodbye to the rugged beauty of the Boundary Waters until next year!